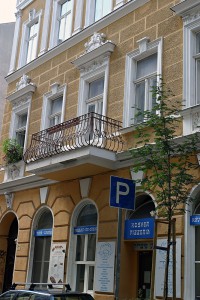 This house was built in 1893 in the jewish quarter of Budapest, hosts 12 flats and boasts with a historic past. The renovated facade hides a shabby-chic yard with a large mulberry tree.

Around 1890 several small shops were established in this quarter, some of which are still in the business, like the only kosher confectionery “Fröhlich cukrászda” (Budapest Dob utca 22.) and the first and only kosher bakery in our very house ( Budapest Kazinczy utca 28.) which has just ceased operation recently. On its place a kosher café has opened.

This area and especially this house attracted us so much that we felt we had to buy this little apartment on the top level just below the attic. The small flat with high ceiling and the historic flair of the house is just the opposite of where we live in the outskirts.

The 7th district “Erzsebetvaros” was founded in 1873, named after the young wife of Kaiser Franz Josef I. of Austria-Hungary, Elisabeth Amalie Eugenie von Wittelsbach, better known as “Sisi”. The district’s inner area, closest to the city centre, was named the “Jewish quarter” in the years 2000, based on historic facts of the Jewish community having here its main centre of their religious life.

This area has changed a lot since recently, the shabby streets have been restored, its buildings partly renovated, partly rebuilt. The Jewish quarter has become a vibrant gastro- and cultural centre, a meeting point for young and old, with buzzing restaurants, bars and cafés, and, of course, the famous ruin pubs. Hardly any week passes without a new place opening.

Due to its central location and excellent traffic connections, this area is one of the favourite destinations of tourists travelling to Budapest. Metro and trams, some of which operate even during nights, are accessible within 5 minutes walking. 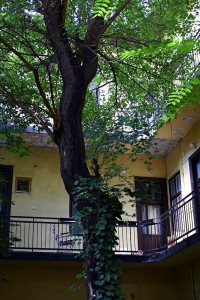 The Jewish quarter’s busiest, rather narrow street bears the name Kazinczy Street since 1897, and connects Király Street and Rákóczi Street. Here, we can find the Art Nouveau style Kazinczy Street Synagogue, the Museum of Electrical Engineering, and the recent years ruin pub craze started off from here as well, in 2004 with Szimpla Kert. Since then, the street gives home to street food places like Bors Bisztró, Ramenka, Soul Food, but traditional Jewish cuisine also makes its appearance in a classic restaurant environment, like in Macesz Huszár. 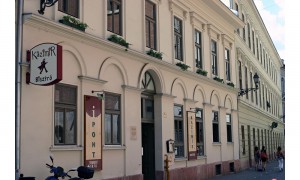 There is also swarm of small taverns, ruin pubs and clubs in Kazinczy Street: Kocka (Rebranded to BRKLYN), Mika Tivadar Mulató, and of course, Szimpla Kert. From 2ndHome, most attractions are accessible without using public transportation. The Opera House is in 7 minutes walk, the National Museum is in 10 minutes distance, and even places, like the House of Parliament is accessible within 20 minutes walk, of course, using public transportation everything is reachable within minutes. Tickets are sold in modern automates offering menu in different languages, and payment option with credit cards.

More adventurous souls may rent a bike or use the Budapest Bikes and discover the city on wheels.

Pictures from the closest neighbourhood:

Our house from the street

A green yard behind our house